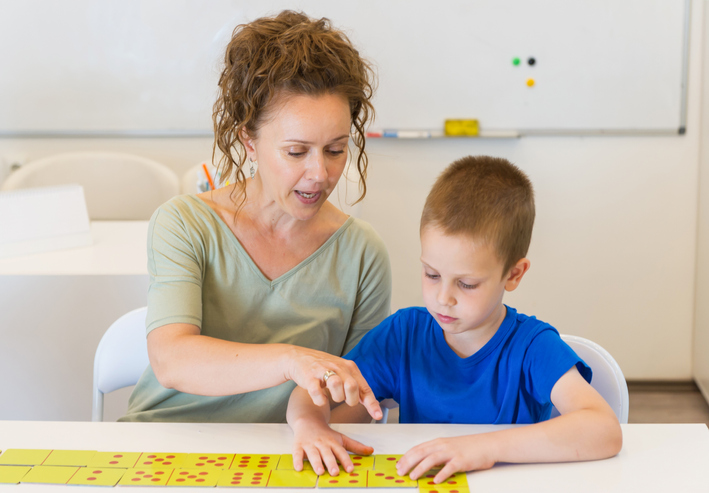 Children who struggle with maths or have dyscalculia often find it hard to see how chunks of numbers make up bigger numbers. They tend to work things out by counting in ones.

Here are some simple ways to help them get to grips with the shortcuts. Just remember to keep it fun so it doesn’t seem like a lesson.

Games using dice or dominoes help children recognise numbers by the pattern of dots, rather than by counting them one by one. Point out how the larger number patterns are made up. For example, six is made up of two sets of three.

Invest in some Cuisenaire rods

Experimenting with a set of these brightly-coloured rods of different lengths can help children see how numbers can be constructed or broken down.

Make the most of shopping trips

A trip to the supermarket is a good opportunity for practice using number groups. If their favourite snack bar comes in packs of five, how many packs will they need to get 10 bars? How many lots of three are there in the nine-pack of toilet rolls?

Sport involves lots of numbers too, and not just in score lines. For example, football teams play in various formations, such as 4-4-2 (four defenders, four midfielders and two strikers). Find, or draw, some visual representations of different team formations. Budding managers will enjoy talking about ways to group the players.

Many kids are fascinated by insects and spiders so why not grab a magnifying glass and go on a bug hunt? Talk about how many pairs of legs the spider has, and how many legs there are if you find three beetles. Look at markings too – a 7-spot ladybird has three spots on each wing and one overlapping both wings at the front. How would a 10-spot ladybird’s spots be organised? Can you find one and see?

Caroline is a London-based freelance writer and ex teacher, contributing to the digital and print publications of a wide range of trade, membership and voluntary organisations, as well as national newspapers and consumer magazines.

How teachers can motivate reluctant readers