Wordshark has been producing learning games for reading and spelling for 25 years, revising and updating continually to reflect best educational practice. Wordshark has remained a small company, staying within its area of expertise.

Wordshark and Numbershark were ground-breaking in their approach to teaching children with SEN using computers, developed in the days before PCs had high-powered graphics. Wordshark was released first with Numbershark coming out a few years later, using the same format. Both programs were (and still are), heavily discussed and debated, to find the very best ways to help children learn.

Ruth Savery, an experienced SEN teacher and mother of 2 dyslexic children started co-writing Wordshark in the early nineties with Roger Burton, an accomplished computer programmer. Roger developed Wordshark from a bedroom, living off savings while Ruth worked as the Education director part time whilst teaching as a SENCO in a North London primary school.

Roger studied Maths at Oxford University and had a varied career including teaching. He worked in the USA very successfully for many years before moving back to the UK. Sadly, Roger died in 2008, but his voice can still be heard in both programs and the games still reflect his great sense of fun. 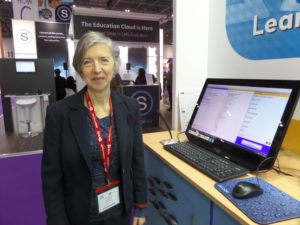 Ruth at the BETT exhibition

Ruth’s background/experience in education and social work, make her highly experienced and knowledgeable on many subjects including SEN. In addition to her teaching role, she lead the way with whole school spelling competitions, ‘introduction to Secondary School’ days, managing the ‘worry wipers’ (responsible students helping out fellow students), and resolving tricky bullying issues in school.  She shares her time between the ongoing development of Wordshark, and environmental/community charity work.

Back in the early nineties, I was looking for an enjoyable way for my students to retain what I was teaching them in school. I wanted to provide the skills needed for English spelling, with all the necessary repetition and reinforcement but at the same time make ‘learning’ a positive and confidence-building experience. Ideally, I needed a multi-sensory computer program full of interactive activities. As this product didn’t exist, we created the first Wordshark!

To develop innovative, stimulating and flexible computer programs which assist the memory in acquiring literacy and numeracy: both with and without specialist teaching support.

Thanks to members of the BDA who gave advice and comment in the early development of Wordshark. White Space is also grateful to the late Dr Bevé Hornsby for allowing certain word lists to be based on those of Alpha to Omega. Finally, the program owes much to the many children, parents, educational psychologists and teachers who have provided suggestions and ideas for improving the programs.

White Space is a member of BESA (the British Educational Suppliers Association) and subscribes to their code of practice.